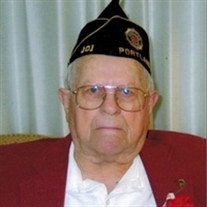 On Friday, February 22, 2013, Harold David Nelson passed away from a heart attack while visiting the gravesite of his wife of 65 years, Anna Justine Nelson, at Willamette National Cemetery. He was 94 years old. Harold was born January 25, 1919 in Portland, Oregon. He was the last surviving member of his family of 12 brothers and sisters. Harold started his career in truck driving/delivery by working for the business his brother Henry started, ABC Transfer and Delivery. He also worked for Montis Trucking and finished a large part of his career with OK Trucking and Delivery. Harold will always be remembered as a man of service, who gave tirelessly to many organizations throughout his life. He was a strong advocate of baseball, where he managed or coached his sons' Little League and Babe Ruth programs. He umpired both baseball and softball for many years as well. Harold was a member of the Teamsters and eventually served as President of the Retired Teamsters. The VA awarded him a commendation for his 2000+ hours of volunteer service at the VA Hospital. He was a long-time active member of the American Legion Montavilla Post where he became Commander and a District Commander as well. He dearly loved Beaver Boys' State, a government program supported by the American Legion, where he was a leader of the program for over fifteen years. Even in the later stages of his life, he was active with the Teamsters and very involved in many activities at his retirement community, Parkrose Chateau, where he called bingo, played bean bag baseball and crafted colorful wood and glass mosaic pieces. Harold touched many lives over the course of his life and what he did for people will never be forgotten. Harold is preceded in death by his 11 brothers and sisters, his wife Anna Justine, his first son Dickard and his daughter-in-law Kathy. He is survived by his middle son David and youngest son Arthur, as well as David's son Michael, his partner Mark Huffman, and their grandson Michael Huffman-Nelson. Harold also leaves behind a number of surviving nieces - Maralee Sauter, Diane Nelson, Julie Ann Sanker, Joanne Blanche and nephews - David Altermatt, RussAltermatt, Paul Compton, Larry Nelson and Eddie Nelson and their families. A viewing will be held Friday, March 1 from 2 - 6 p.m. and services will be at 11 a.m. on Monday, March 4 at Cremation and Burial Care of Oregon, 225 NE 80th Avenue, Portland. A procession and interment will follow at Willamette National Cemetery.

On Friday, February 22, 2013, Harold David Nelson passed away from a heart attack while visiting the gravesite of his wife of 65 years, Anna Justine Nelson, at Willamette National Cemetery. He was 94 years old. Harold was born January 25, 1919... View Obituary & Service Information

The family of Harold David Nelson created this Life Tributes page to make it easy to share your memories.

Send flowers to the Nelson family.