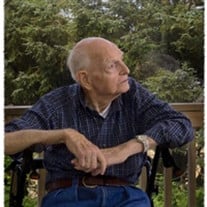 Harold Aldridge was born at home in Milwaukie, Oregon, to Alma and Willie Aldridge on January 31, 1924, and was the youngest of three brothers. He attended Wichita Elementary School, Milwaukie Junior High School, and Milwaukie High School. After high school graduation, he entered the Army during WWII and was stationed in India with the Signal Corp. While in the Army he attended two years of higher education at Baylor University in Texas. Following an honorable discharge from the Army, he married his Portland sweetheart, Violet Parrish, on August 17, 1946. He and Vi moved to Seattle, where he continued his education at Seattle Pacific University, earning his Bachelor of Science degree. After earning his degree in math and physics, he took a job with Honeywell in Portland, Oregon, and worked as an application engineer. He moved his wife and son to Portland where they would live until 1957. Then he moved his family of four, having added a daughter, to Milwaukie. A couple years prior to his retirement from Honeywell, Harold bought a few acres of rural property in the Oregon City area and contracted with his cousin, Walt Aldridge, to build a house on it. He and his wife lived in the Oregon City area until 2007 when they moved into the Gladstone retirement community of Homewoods on the Willamette. His failing health required a move to assisted living about a year ago. During Harold's life he was very active in the Nazarene church and his faith was an important part of his life. When living in Portland as a young adult he attended the Central Nazarene Church in Portland where he taught the teens' Sunday school class. After moving to Milwaukie, he attended the local Nazarene Church where he was a choir member and was on the church board as the church treasurer. After retirement, he attended the Oregon City Nazarene Church for several years. Once driving became an issue, he attended the services in his Homewoods community. Harold enjoyed music and often sang for weddings, funerals, and church services. He not only served in his church, but extended his service to others in the community at large. He invested several years in learning to speak Spanish and volunteered to tutor adults in English. In later years, he volunteered at the Oregon City senior center delivering Meals on Wheels and senior center newsletters to various locations in Oregon City and the surrounding communities. Harold had many interests during his life of 91 years. In his early years, he was active in the outdoors where he enjoyed camping, hiking, wildlife, backpacking, and bicycling. Traveling was one of his great passions. He spent time visiting Alaska, Hawaii, most of the lower 48 states, Canada, the British Isles, and Puerto Rico, but he especially enjoyed his trips to Mexico. His love of reading was obvious, and he studied a wide variety of topics - particularly his Bible, history, politics, wildlife, geology, and numerous other scientific subjects. He died at home on January 7, 2015, where his wife, to whom he was married for 68 years, was able to care for him. At his passing he is survived by his wife, Vi Aldridge; his son, Wayne Aldridge; his daughter, Gail Nuttbrock; three grandchildren; and eight great-granchildren. His family is saddened at his parting, but is confident that he is with the God he served and worshiped. Everyone who knew Harold is welcome to celebrate his life at Peake Funeral Chapel in Milwaukie, Oregon, on January 15, 2015, at 9:45 AM. A ceremony at the Willamette National Cemetery, where the interment will take place, begins at noon following the memorial service

Harold Aldridge was born at home in Milwaukie, Oregon, to Alma and Willie Aldridge on January 31, 1924, and was the youngest of three brothers. He attended Wichita Elementary School, Milwaukie Junior High School, and Milwaukie High School. After... View Obituary & Service Information

The family of Harold Aldridge created this Life Tributes page to make it easy to share your memories.

Harold Aldridge was born at home in Milwaukie, Oregon, to Alma...

Send flowers to the Aldridge family.