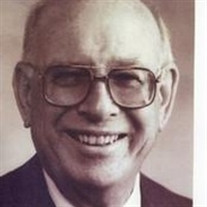 Hal Haynes Rhea August 9, 1923-November 15, 2011 Hal Haynes Rhea died peacefully in his sleep November 15th in Portland, Oregon, at eighty-eight years old. Hal was born to Herbert and Eula Rhea on August 9, 1923 in Damascus, Virginia. Both he, and his surviving brother Joe, attended Virginia Polytechnic Institute where he earned a Bachelor of Science in Mechanical Engineering in 1944. After graduating, Hal moved to Syracuse, New York, for his first job at Carrier Air Conditioning Company. It is here he met his first wife Betty Goewey, of Oswego, New York. They were married in 1948, and had four sons - John, Robert, Tom, and Mark and one daughter - Patricia. Hal had a long, exciting and successful career in the heating, refrigerating and air-conditioning industry. He excelled at Carrier managing the team responsible for the creation of the first round air conditioning unit. In 1967 he was promoted to manager of the Carrier Manufacturing Plant in Tyler, Texas. In 1969, he was promoted to Vice President of Bryant Heating and cooling in Indianapolis, where he stayed until 1977. Next, he moved on to work for Lennox Heating and Cooling as Vice President managing their Research and Development Plant in Carrollton, Texas. One of his many accomplishments there was to oversee the creation of Lennox's Pulse furnace. Shortly after moving to Texas, Betty, his wife of 30 years, passed away after a lengthy battle with brain cancer. One year later, he met Charlotte Sticka, who in 1978 became his second wife. Charlotte had three children from her first marriage - daughters Bobbie and Marge, and son - Skip. In 1992, Hal retired from Lennox and moved with Charlotte to her hometown of Portland, Oregon where they helped to care for Charlotte's daughter Marge, who suffered from multiple sclerosis. Throughout his life, Hal was an avid golfer and photographer and in retirement became an accomplished woodworker, building many beautiful and timeless pieces in his state of the art woodworking shop. In 2007, Hal and Charlotte moved to Willamette View Retirement Community where they have made many dear friends. Charlotte and Hal had a wonderful and full 33 years together traveling the country and world together as well as enjoying many years at their vacation home in Cannon Beach, Oregon with family and friends. Hal's first wife Betty, sister Sarah, oldest son John, stepdaughter Marge and grandson Andy all preceded Hal in death. He is survived by his beloved wife Charlotte, his loving children Robert, Tom, Mark, Patty, step daughter Bobbie and step son Skip as well as grandsons Alex, Justin, Walker, Evan, Kevin, Kyle, Patrick and step granddaughter Lonnie. Hal will be greatly missed across the country by family and friends.

The family of Hal H. Rhea created this Life Tributes page to make it easy to share your memories.

Send flowers to the Rhea family.