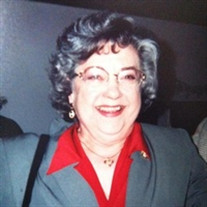 Gladys Algeciras Fajardo, her journey began May 15th 1921, born in Santiago de Cuba, Cuba she lived there happily the first 40 years of her life with her husband Daniel and three sons Danielito, Desi and Danilo she enjoyed a great life. In 1961 all this was turned upside down after our country was taken over by a communist regime, one son on the run from Castro, the other two preparing to leave the country under the Peter Pan program; the happy life became a nightmare. Thanks to God things worked out in her favor, her oldest son was extracted from Cuba and the two younger ones were able to leave for the US. However as Gladys and Daniel were preparing to leave Cuba Daniel was removed from the plane and kept behind for 4 years, now she faced an uncertain future in a new country that she only knew from previous vacation travels. This converted her into what we called her "The Iron Lady". Gladys lived in Miami for a little over a year, she had a job as a house keeper in a motel in exchange for a free cottage for her and her children. In 1962 her brother Frank moved to Portland Oregon, soon after he asked her to move there with Desi and Danilo, at the time her older son serving in the US Army Rangers. She made the move in March 1963, and another journey began. This would be her new life in a foreign land; she did not have any money could barely speak English and her husband was in Cuba, however she had the will to survive and make good in this new chapter of her life. She took jobs from scrubbing floors at the Hilton Hotel to ironing in a clothing manufacturer, which due to her lack of English she had a very interesting anecdote; one day she mentioned that she thought there was a fire at the plant because one of the supervisors kept saying fire, the next day she went to work and everyone was looking at her and commenting behind her back, then she found out that what she thought was a fire in the plant was her supervisor firing her, well things worked out OK she worked there for another 2 years until she quit to take a better job at White Stag. This last job would be the turning point in her new life, she learned how to sew, and after a while she started looking for work in local women fashion stores and was able to get hired at Nicholas Ungar, one of the best women stores in Portland, and was mentored by a very nice lady, Mrs Wilcox, who taught her how to do high fashion sewing. While working there she met one of the nicest friends she had and we still have, Liz Carrion, they were very close; Gladys looked at Liz as the girl she never had and she became part of her family. In 1965 her husband was able to leave Cuba and they were reunited November of the same year. In 1968 Gladys and Daniel opened the first Fajardo store next to the Bagdad theater, she would work at Nicholas Ungar until 5:00pm then would run the store with Daniel until 8:00pm. A few years later they opened another store in Hillsboro and also in the Hollywood district on Sandy Blvd; all this time working as a seamstress during the day and a store keeper at nights and on the week ends. Later on she started working at Nordstrom where she was Alterations Manager for 17 years, in 1983 her husband Daniel died of cancer she was only 62 years old and another chapter of her life began. She sold the stores and dedicated her time to her job at Nordstrom and her family; Gladys was a very independent woman and a very generous person. She worked until her 70th birthday and dedicated herself to her garden and enjoyed entertaining her friends and family. On November 30th she embarked on her last journey, she is home in heaven with all her loved ones, specially her grand kids Desi Jr and Mark, and today we say "Til we see you again", we know she will be there looking after us as she always did. She was loved by many and we will miss her very much. She is survived by her sons Daniel, Desi & Danilo, her brother Jorge Algeciras and sister Irma Algeciras, daughter in law Mei Ling, Mary & Mary, sister in law Mimi Algeciras and brother in law Jorge Mascaro. Grand children Danny, Lisa, David, Michael, Diana, Marta Rosa & Cristina. Great Grand children, Blaise, Zack, Max, Olivia, Makena, Kevin, Patrick, Connor, Isabela, Natalia, Gabi, Cristian, Gisela & Liliana.

Gladys Algeciras Fajardo, her journey began May 15th 1921, born in Santiago de Cuba, Cuba she lived there happily the first 40 years of her life with her husband Daniel and three sons Danielito, Desi and Danilo she enjoyed a great life. In 1961... View Obituary & Service Information

The family of Gladys A. Fajardo created this Life Tributes page to make it easy to share your memories.

Send flowers to the Fajardo family.