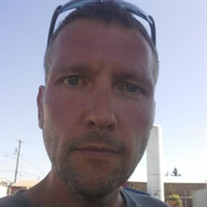 George Vern Tuel Born Into Our Hearts on September 28th, 1972. In Portland, Oregon. Forever loved by Twauna Mary Tuel (Mother) and George Daniel Tuel (Father) A first born baby boy that brought much joy, love, and excitement to caring nurturing young parents. He was also the first grandchild for his grandparents Wes and Carolyn Sumpter. They were a happy family in every way. When Georgie was 8 months old the family moved to Fairbanks, Alaska. Where George Sr. Started his plumbing career on the pipeline. His mother Twauna was happy to stay home with her son. George attended kindergarten in Fairbanks, Alaska. His sister Shawna Mary was born there in June 1977. In 1979 they moved back to Portland,Or. Where George attended first grade. The family settled in Milwaukie, Or. Shortly thereafter George Started second grade at Witchita Elementry, then onto Milwaukie Jr. High, And finally Milwaukie High School. He Graduated Class of 1990 which made himself and us all proud. George started working in the Health Care field and worked for Northwest Mental Health for 15 Years, at the time of his death he was still working in Health Care helping people in their homes being licensed by the State of Oregon . He and Julie Marlett Had a beautiful baby boy named Justin Marlett born December 10th. 1994. They were overjoyed! Over the years George and Julie remained close friends and parented together to provide support and happiness for their son. On November 19th 2012. George and Amanda Newton were blessed to welcome new edition George William Micheal Tuel. While George was hurting from his own ailments and it was hard for him to chase around a young boy as he said, "I am too old for this". He did his best and gave little George the best care a father could give. He loved his little man. Baby George was living with him at the time of his death. George was a loving giving person, with a heart of gold. He helped many people, even when sometimes he didn't have enough to help himself. He was a funny guy and could always make you laugh. He loved playing and watching all sports even golf. He especially loved playing basketball with his friends, son Justin, niece Jaydyn and nephew Davyn. In Later years he enjoyed frisbee golfing with his best friend Mike and many other friends. George was a member of Sons of American Legion squadron #180 in Milwaukie. He and his Father George Sr, spent a lot of time there socializing together. George peacefully left this world on December 25th 2014. He will be painfully missed by, Mother; Twauna Tuel, Father; George Tuel, Stepfather; Abel Reyna Sisters; Shawna Tuel-Board, Deanne Reyna Brother In Law; Justin Board Brothers; Brian Tuel, Jeff Wilson, JR Tuel, Dustin Bailey, Donovan Reyna Sons; Justin Marlett And George Tuel Neice; Jaydyn Tuel, Nephew; Davyn Tuel Aunts and Uncles; James and Kate Sumpter, Nancy Chenell, Colin and Barb Sumpter, Jeanne and Robert Phillips, Tina and Rich Flemming, Carole Nyce, Theresa Tuel, Dottie Johansen, Judy Kachaness. Cousins; Lexine Smith, Amber Ulen, Stephen Jr Tuel, Robert Nyce, Taylor Flemming, Carly Flemming, Karie Mae Chenell, Amanda Chenell, Ransom Sumpter, Emily Sumpter, Stewart Klein, Aaron Phillips, Kirsten Sumpter, Jacob Sumpter, Shawn Sumpter, Clara Kachaness, Stacey Farris, Dylan Tuel, Charlie Tuel. Also by numerous other family members, and friends in the Milwaukie area where George grew up and lived. Proceded in death by; Grandparents Violet and Swede Burton, George Tuel. Carolyn and Wes Sumpter, Leonard D. Wiss. Brother; Daniel Tuel Uncles; Shawn Sumpter, Ray Johansen, Steve Tuel, and Mike Tuel. Cousin; Cyrus Thorton

The family of George Vern Tuel created this Life Tributes page to make it easy to share your memories.

Send flowers to the Tuel family.