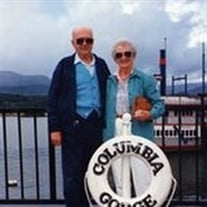 Franz Eric Sedlacek was born August 31,1917 in Honolulu, Hawaii to Harryet and Ernst Sedlacek. He grew up in Denmark and New York City where he attended grade school and high school. Franz attended New York University, University of Oregon and Oregon State University where he received a Masters Degree in Education. While in the U.S Army at Camp White, Oregon, he met Ethel Margorie Freeman. They were married June 1, 1943 in Fort Sill, Oklahoma. Franz served in World War II and continued in the Army Reserve retiring as a Major. He touched many lives through teaching drafting, wood shop, and stage crew to students at Willamina, Milton-Freewater, and Clackamas High Schools. Franz was the first Drafting Instructor at Clackamas Community College. After retiring in 1977, Franz and Marge moved to Netarts, OR. While capturing God's creation through his photography, Franz again touched many lives. In 1993, Franz and Marge moved to Town Center Village in Happy Valley, OR. He is lovingly survived by his wife Marge, children, Eric, Eileen, and Joan, six grandchildren and four great-grandchildren. Memorial Service will be held at 2pm on Saturday, May 1st, 2010 at St. Stephen Lutheran Church in Gladstone, OR. Arrangements entrusted Peake Funeral Chapel, Milwaukie, OR.

The family of Franz Eric Sedlacek created this Life Tributes page to make it easy to share your memories.

Send flowers to the Sedlacek family.