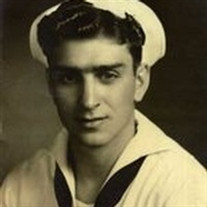 Floyd James Baty was born September 25, 1919 and passed away in The Dalles, Oregon on March 15, 2010. Floyd was born in Molalla, Oregon to Warren and Gertrude Baty. Warren lived on Land he inherited from his father Andrew Jackson Baty, who owned 640 Acres with his wife Mary (Dad's great-grandparents) and pioneered in the 1800's. Andrew and his wife donated one acre of land for the Dickey Prairie School. They are both buried in the small pioneer Baty cemetery located in The Dickey Prairie area of Molalla. Dad left the family farm and moved to Oregon City then moved to Milwaukie. He went to Milwaukie High School where he first met our mother Della Fitzell. After high school, Dad drove truck but decided to join the army Where he was enlisted for 1 year, 1 month and 3 days. During an act of Congress that allowed people to change their branch of service, Dad decided To instead join the Navy where he served for the next 4 years as a pharmacist mate, 2nd class V6. In 1946 after the Navy, Dad went to work for Crown Zellerbach Paper Mill. During his leave time in the Navy he dated our mom and they got married on March 16, 1946 and lived in Milwaukie, OR. He retired from the mill after 36 Years. Later he and mom moved to Lincoln City where they fished on the Siletz River. After a few years of living at the coast, they moved back to Milwaukie. When Mom passed away in 2005, Dad moved to Pine Hollow with his daughter Sherrell. He loved sitting out on the porch and feeding the animals and Soaking up the sun. He used to get as brown as a bear! His job was to ride his 4-wheeler to the mailbox to retrieve the mail. Sometimes he would fish on Pine Hollow Reservoir. Earlier in his life he enjoyed fishing the Willamette River and Tillamook Bay. Every year during October for two weeks the whole family would join Mom and dad at Garibaldi for fishing, crabbing, eating seafood and watching The World Series. During this time the marina had a fishing contest for the biggest fish. One year Pat remembers dad beating her by one ounce! He accused him of putting a weight in his fish to win! He won second place that year (beat by a woman). He also enjoyed the times that he went fishing with his son Jim on the Siletz River at Chinook Bend where the whole family would also meet. Now he is up in Heaven fishing with Mom and his Dad. Miss you Dad! Love, Jim, Pat and Sherrell. Floyd was preceded in death by his wife Della and his grandson Keith. He is survived by his son James Douglas and two daughters, Patricia Hammonds and Andrea (Sherrell) Jackson, 76 grandchildren, 21 great grandchildren and 14 great-great grandchildren. Services will be April 15 at 12:30pm at Willamette National Cemetery. Please meet at the administration building. The family suggests remembrances and contributions be sent to the American Heart Association.

Floyd James Baty was born September 25, 1919 and passed away in The Dalles, Oregon on March 15, 2010. Floyd was born in Molalla, Oregon to Warren and Gertrude Baty. Warren lived on Land he inherited from his father Andrew Jackson Baty, who... View Obituary & Service Information

The family of Floyd James Baty created this Life Tributes page to make it easy to share your memories.

Send flowers to the Baty family.