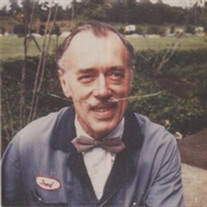 Fielding (aka “Fred” or “Pop”) passed away in the early morning hours of Aug. 22, 2018 from complications of living 95 amazing years.Born to Fred W. and Erika (Werner) Behrman in 1923, Fielding was named after Fielding and Ellis Cooley, who owned a trucking company that gave his father a job after he emigrated from Hamburg, Germany. “Fred” the younger grew up in several Portland neighborhoods during the Great Depression, including an apartment on N.W. 21st and Lovejoy which still stands. After graduating from Benson High School (where he learned his trade as a machinist), he enlisted in the Army Air Corps and served as a Corporal in World War II. Though his color-blindness gave him the gift of being able to see through camouflage, Fred - as the son of German immigrants - was kept stateside. He was a flight engineer/mechanic for B-17s and B-29s in Hobbs, N.M., where prospective pilots of these aircraft were trained. After the war, Fred worked at Iron Fireman machine shop in S.E. Portland. During an evening of roller-skating at Oaks Park, he met Virginia Zak, who would later become his wife. They lived in Milwaukie until Virginia’s passing in 1976, having raised four children. Fred retired from Omark Industries (now Blount) in 1985, and kept busy with his hobbies, which included Ham Radio, fishing, bowling, biking, smoking cheese and being annoyed with tomato-growing. He found love again with Frances Pitts, who was his sunshine and traveling companion for over 20 years before her death. Fred is survived by sons, Mark (Susan) and Paul (Susie) Behrman; daughter, Gina (Michael) Cubbon; grandchildren, Jim, Jordan, Joe, Chris, Jesse, Susanne and Molly; and 12 (and 1/2) great-grandchildren. He was preceded in death by his parents; wife, Virginia; companion, Frances; and eldest son, Fred. A memorial will be held at 10:30 a.m., Friday, Sept. 7, 2018, at Peake Funeral Home in Milwaukie, followed by interment with military honors at Willamette National Cemetery at 12:30 p.m., and a reception at his daughter’s home (address will be given at the memorial or on request). Visitation at Peake 10 a.m.-2 p.m. Thursday, Sept. 6, 2018. To send a flower arrangement or to plant trees in memory of Fielding "Fred" Ellis Behrman, please click here to visit our Sympathy Store.

The family of Fielding "Fred" Ellis Behrman created this Life Tributes page to make it easy to share your memories.

Fielding (aka “Fred” or “Pop”) passed away in the early morning...