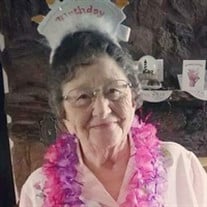 Erma Irene (Lutz) Matter July 10, 1930 - July 16, 2017On July 10th 1930 in Isabel South Dakota, born to John and Bertha Lutz, their sixth child Erma Irene entered into the world. Growing up as a young girl in the 30's and during the Great Depression, Erma knew the value of money, she knew the land her parents owned was to put food on the table. Most of you have seen an episode or two of Little House on the Prairie, that's what Isabel SD looked like and still resembles today. The school house doubled for church on Sunday, and the General Store had accounts that were paid back with labor and family's looked out for one another. As Erma became a teenager, she helped make money for her family, by delivering milk, and later she worked in the general store. 1946 she let her girlfriend set her up on a date with a young man just home from WWII in Glad Valley, SD, 18 miles from Isabel; they traveled to meet this man, Earl Dwight Matter. It was then she met the man of her dreams, and the courtship began. With her father's permission on September 16th 1947, Erma married Earl Matter and they set up home in Isabel, SD. Still young newlyweds, their love and passion for one another conceived their first child, a son they named Allen Lynn, Born August 22, 1949. It wasn't more than just a few years later the Matter family was growing again. On November 11th, 1952 Norrene Ann was born, their first daughter. With work running low in Isabel, Earl packed up his family and moved to Lead, SD. It must have been a cold October in 1954, nine months later on July 5th, 1955, born in a hospital parking lot, Kathy Jean peaked her face in the world, and joined the Matter family. Go west he was told that's were all the jobs were, and with that Earl Matter packed up his family and moved again to AZ. The hot dry desert, well... it didn't take long before they moved to the Pacific NW. With several stops in-between and yet another cold October night fell upon them and again the Matter family would grow. On July 2nd, 1957 Randy Lee, evened the score 2 boys and 2 girls. A few days later the family finally settled in Milwaukie Oregon, a home purchased for $8,000.00 is still the home of the Matter Family. At age 27 Erma had four kids, a house and a husband of 10 years. Life then was beginning to look more like Happy Days, Rock and Roll Music, Dances, Girls Friends, Neighbors and new lifelong friends that came their way, the Payseno's, Parkers, Grudles, Habermans, and Foy's just to name a few. Summer picnics at Carver and Baron parks, clam digging trips, Christmas tree flocking parties and the Great Seafood Buffets. Through all of these times, and not too far down the road in her life, Erma felt that ole so familiar feeling again, just when they thought they were done. On April 26th, 1962 Vickie Mae the 5th child, the little redheaded sister was born. 1964 Erma went back to work again at OECO Corp. Portland Oregon In April of 1986 Erma lost the love of her life, the man that gave her 5 children. Although a sad time she knew that the legacy of Earl Matter would continue in his children. To live life surrounded by Love, with family and friends, to always have a cold beer to offer and a good laugh. After 30 plus years of service at OECO Corp. Erma finally retired at age 66. In the past 21 years we have seen lots of frequent flyer miles adding up, with trips back home to SD and AZ, the East Coast and countless Cruises all over the world. Erma is the proud Grandmother of 10 and 7 great grandchildren. Through all the years with life's ups and downs, the loss of loved ones, and good friends. There is one thing my Brothers and Sister and I all agree on, as I am sure all of you do as well. That Erma Irene Matter was a very Strong, Loving and Compassionate Woman, who has inspired each of us. Erma is survived by all of her children, 10 Grandchildren and 7 Great Grandchildren. Allen Lynn Milwaukie Oregon Norrene Ann Haberman-Milwaukie Oregon Kathy Jean Carroll-Portland Oregon Randy Lee Matter-Carver Oregon Vickie Mae Arnone-Portland Oregon

Erma Irene (Lutz) Matter July 10, 1930 - July 16, 2017On July 10th 1930 in Isabel South Dakota, born to John and Bertha Lutz, their sixth child Erma Irene entered into the world. Growing up as a young girl in the 30's and during the Great Depression,... View Obituary & Service Information

The family of Erma Irene Matter (Lutz) created this Life Tributes page to make it easy to share your memories.