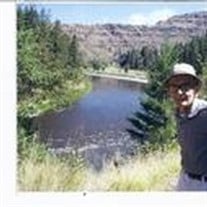 Emil A. Becker, 91 Longtime resident of Milwaukie, Oregon, Emil A. Becker passed away March 21, 2011 in Enterprise, Oregon at the home of his daughter. Emil was born in Washougal, Washington on November 24, 1919. His marriage of 50 years to Annette (Applegate) Becker, produced two daughters, Sharon Coursey, and Alexis Chandler. Annette passed away in 1993, and Emil then divided his time between his two daughters, in Washington state and California, before settling at Cascade Plaza where he enjoyed an active social life and made many friends. After daughter Alexis passed away in 2009, Emil moved to Wallowa, Oregon to be closer to his remaining daughter Sharon. The son of immigrants, his love of country made answering Uncle Sam's call to arms a natural response. After serving his country as a U.S. Marine in the Pacific Theater of WWII, Emil settled his growing family in the Willamette Valley to be near to his parents and extended family. Emil always put his family above his own needs, and was interested in the every day lives of his grandchildren, never forgetting to ask after each one. His hobbies included yard work, golf, and wood-working in which all he excelled. Retiring from Franz Bakery after 27 years of loyal service, Emil was happiest meeting his customers and building up sales routes for the company. Emil is survived by two sisters, Marie Hill and Rosalia Card, both of Portland; brother, Bert Becker of Oregon City; daughter Sharon Coursey of Wallowa, Ore; six grandchildren, Jarrod Coursey of Temecula, Calif.; Justin Coursey of Kernville, Calif; Ryan Chandler of Alexandria, Virginia; Jannelle Dion of Coeur d'Alene, Idaho; Kirstin Doughty of Bothell, Wash; and Sheryl Lane of Gig Harbor, Wash; ten great-grandchildren from 22 yrs to 5 months; and one great-great-granddaughter, 1 yr. Emil was preceded in death by his sister Emma, his brother Alfred, and parents, Alex and Maria Becker. Funeral services to be held Friday, April 1, 2011 at 10:30 a.m. at Peake Funeral Chapel 1925 SE Scott Street in Milwaukie, Oregon; Graveside Services with Military honors will be held at 1:00 PM at Skyline Memorial Gardens, Skyline Blvd in Portland, Oregon at 1:00 p.m.

Emil A. Becker, 91 Longtime resident of Milwaukie, Oregon, Emil A. Becker passed away March 21, 2011 in Enterprise, Oregon at the home of his daughter. Emil was born in Washougal, Washington on November 24, 1919. His marriage of 50 years to... View Obituary & Service Information

The family of Emil Alexander Becker created this Life Tributes page to make it easy to share your memories.

Send flowers to the Becker family.