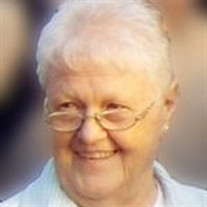 Edith "Louise" Stowell was born to O.P. and Minnie Logan on November 5, 1941, in Prineville, Oregon, the youngest of three children. In 1959, Louise moved to Portland, where she met Douglas Stowell through mutual friends in 1960. They were married December 8, 1962, and started their family when their oldest son Dwayne was born in 1963. Their second son Don was born in 1965. During these years, they enjoyed their time surrounded by friends (Carol, Jay, Marianne, Ginny) while living in an apartment on NE Couch Street. In 1972, Doug and Louise found a house in Milwaukie and in 1973, they had their daughter Amber. Louise stayed home and raised her children until the youngest one was in junior high. She did part time work as a bookkeeper, helped her elderly neighbors, and she worked as a Braille transcriber for the Oregon Commission for the Blind. In 1987, she began working as an industrial seamstress at Hanna Industries, and in 1997, she joined Office Depot, where she worked as a cash office associate until the time of her death. At Office Depot, she arranged the yearly Teacher Appreciation breakfasts, and she was instrumental in gathering and distributing school supplies to area schools in need. Louise was very dedicated to her family and friends. Her quick wit and feistiness will leave a lasting impression on everyone who knew her. Although a long time resident of Portland, she would check the local Central Oregon news every morning online. Each day she and Doug would check on a family of eagles that had nested in a tree seen from their porch. In the last years of her life, Louise dialyzed at DSI Dialysis Clinic, where she met many of her close friends (Martha, Elvira, Vince, Heather, and so many others). This was her unofficial "social" club three times a week. She is loved very much and will be greatly missed by all who knew her. Louise is survived by her husband of almost 47 years, Doug; her children Dwayne, Don and Amber; her brother Bob Logan; daughters-in-law Shannon and Molly and son-in-law Nicolas; sister-in-law Sharon Logan and brother-in-law Monte Stowell, and grandchildren De'Angelo, Logan, Dorinda, Madeline, Abigale, Henry, and Samantha. Her brother Larry passed in 2006. Louise gave to numerous charities. Donations can be made in her name to the National Kidney Foundation, the American Heart Association or any charity that is close to your heart. Memorial service will be held on Saturday, Oct 17th at New Hope Community Church at 1pm. 11731 SE Stevens Road. Portland OR.

Edith "Louise" Stowell was born to O.P. and Minnie Logan on November 5, 1941, in Prineville, Oregon, the youngest of three children. In 1959, Louise moved to Portland, where she met Douglas Stowell through mutual friends in 1960. They were married... View Obituary & Service Information

The family of Edith Louise Stowell created this Life Tributes page to make it easy to share your memories.

Edith &quot;Louise&quot; Stowell was born to O.P. and Minnie Logan on November...

Send flowers to the Stowell family.