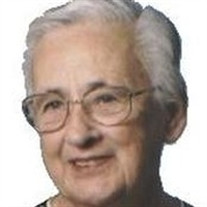 Dorothy was born in Jessup, PA on March 9, 1924 to Michael and Agnes Hiznay. After graduation from Plymouth High School, she went to work for the Army Signal Corps learning how to fix radios and inspect military equipment like saddles, holsters and gloves. She then went to work in the research and development lab at Rohm and Haas in Bristol, PA and volunteered with the ambulance corps. After courting via letter during WWII, she married Robert Pine September 24, 1945 at St. Stephens Slovak church in Plymouth, PA. Her husband was in the Army Air Corps and later the Air Force. They moved often, living on the following bases: Ellington AFB TX, Goodfellow AFB TX, Fort Slocum NY, Carswell AFB TX, Randolph AFB TX, Lake Charles AFB LA, Lockbourne AFB OH, Montgomery AFB AL, Westover AFB MA, Castle AFB CA, Griffiss AFB NY and Andrews AFB MD. They came to Oregon in 1964 and have lived in Milwaukie, Portland, Gresham and Clackamas. The couple had five children: Robert, Mary Thornburgh, Thomas, David, and Richard. While the children were growing, she was a member of the PTA, a Cub Scout Den Mother, a room mother, teacher's aide and librarian's assistant. She and her husband were also members of the Parents' Advisory Council at Willamette University. After age 50, she attended Mount Hood Community College where she received an associate degree in Business Administration while placing on the dean's list. She also qualified to be licensed as a State of Oregon Tax Preparer. For over 12 years she created cryptograms for the Air Force Times and for 3 years for the Navy Times. She was a member of American Legion Auxiliary Shawnee Post 463 of Plymouth PA, OSTA, AARP and the Altar Society of St. John the Baptist Catholic Church in Milwaukie. She passed away at home in Clackamas on Sunday, October 7th. She is preceded in death by her husband of 65 years, grandson and sisters Agnes Ford and Margaret Philips. She is survived by her children, 8 grandchildren, 12 great grand children, brother Michael Hiznay, 5 nieces and 4 nephews. A service will be held at St. John the Baptist Catholic Church in Milwaukie on October 16 at 11:30. Interment will follow at Willamette National Cemetery.

Dorothy was born in Jessup, PA on March 9, 1924 to Michael and Agnes Hiznay. After graduation from Plymouth High School, she went to work for the Army Signal Corps learning how to fix radios and inspect military equipment like saddles, holsters... View Obituary & Service Information

The family of Dorothy H. Pine created this Life Tributes page to make it easy to share your memories.

Send flowers to the Pine family.