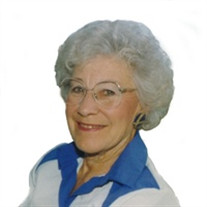 Dorothy June Reisdorf Jones was born July 8, 1920 in Astoria, OR, and died peacefully April 8, 2014, in Portland, OR. Dorothy spent her happy early childhood in Hammond, OR surrounded by aunts, uncles and cousins. When she was nine the family relocated to Astoria where she graduated high school and lived until her marriage to William E. Jones on March 15, 1942. The couple moved to the St. John's area of Portland until the end of WWII when they moved to Coos Bay. In 1951 Dorothy and Bill and their three children relocated to Roseburg where the couple opened The Umpqua Gun Store on SE Stephens Street. Dorothy worked with her husband at the gun store throughout her work life. She earned her real estate license in 1960 and worked for a short time as a real estate agent, a job she loved. She was a member of The First Christian Church of Roseburg for 60 years and actively supported church youth programs. Her compassion for others was fulfilled by volunteering in reading programs for children and adults, welcoming young Job Corp workers into her home for meals and mentoring several young people through difficult situations in their own lives. She volunteered at the Roseburg Rescue Mission following retirement and continued to support their work for the remainder of her life. Dorothy was a beloved mother to Linda (Ladd), sons Gordon and Jeffrey, grandmother to Stacey and Ryan Ladd, Brooke, Parker and Nicole Jones and great-grandmother to Tyler and Shawn Connelly, Dylan, Joshua, Alycia and Meron Ladd, and devoted aunt to 13 nieces and nephews. She had many well-loved friends from throughout her life and was counted by many as among their dearest and closest friends. She was known for her quick wit, great sense of humor and natural beauty. She was athletic, played volleyball, water skied until she was 70, hunted and fished and walked for good health nearly every day until she moved to Willamette View Retirement Center in April of 2013. Dorothy was preceded in death by her husband of 64 years, her parents, two sisters, one brother and one niece. A celebration of life will be held in Portland at the Willamette View Terrace, 13169 SE River Road, 4th Floor Auditorium, at 2 PM, Saturday, May 10, 2014. In Memoriam donations may be made to the Roseburg Rescue Mission, P.O. Box 1937, Roseburg, OR 97470, or The First Christian Church Youth Programs, 432 S.E. Kane St., Roseburg, OR 97470

Dorothy June Reisdorf Jones was born July 8, 1920 in Astoria, OR, and died peacefully April 8, 2014, in Portland, OR. Dorothy spent her happy early childhood in Hammond, OR surrounded by aunts, uncles and cousins. When she was nine the family... View Obituary & Service Information

The family of Dorothy June Jones (Reisdorf) created this Life Tributes page to make it easy to share your memories.