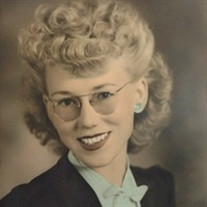 Dorothy Elaine Anna was born to parents Engward and Elin (Johansson) Nielsen on February 11, 1921 in Cairo, Nebraska. Dorothy, known by many as Dot, and “Blondie” by her brother Slim, grew up living on a farm in Nebraska with her two brothers, Slim and Duane. If asked, memories of her childhood were recalled with such fondness.  Dorothy moved to Denver, Colorado looking for a life she could not find in small-town Nebraska and there she met a young soldier boy—Kenneth Brace—who was in the Army Air Corps stationed in Denver. He was both her first love, and the love of her life. They were married on August 8th, 1942 in Lincoln, Nebraska, and for a time they moved from military base to military base When the war ended, and the couple were trying to decide where to live, they took a map of the USA, flipped a coin, and wherever the coin landed on that map was where they would move to. The coin ended up on a small-town in Oregon, but with work sparse, it was decided that the larger city close by, Portland, would be the better choice. While Ken found employment with the Union Pacific Railroad, Dorothy hired on at Pendleton Woolen Mills as a spooler. She loved her job and continued working there for over 30 years. Dorothy enjoyed gardening (she was enamored with Fuchsias), playing her guitar and singing (yodeling was a talent of hers), crocheting, embroidering, knitting, reading, spoiling her pet companions (most recently her Chihuahua Tuffy), Church activities, poking around at garage sales to find inexpensive treasures, and doing household tasks that gave a sense of accomplishment. She was a great cook and delighted in making family dinners, dressing up the dining room table for the occasion, and having everyone over. Favorites included her mashed potatoes and noodles, Rhubarb Pies and Swedish Rice Pudding. Whether preparing desserts, or special occasion feasts like Thanksgiving or Christmas dinner, she was a whiz. Although Dorothy was not able to have children of her own, she and Ken spent a great deal of time with their nieces and nephews – they both had a deep love of family, but she was the heart and soul that kept the families close, even as far away as Sweden. Dorothy was lovingly cared for by Slim and Duane, together with their spouses, as needs grew in her life. She died peacefully in her sleep at Gracelen Terrace on June 17th due to complications from Alzheimer’s disease. She was 99 years of age. Dorothy will be remembered as being very kind with an easygoing nature, cheerful personality, and fun-loving spirit, along with having a strong faith in God. She and Ken were both parishioners at the Bryn Zion Welsh Church in Beavercreek and for many years were very active in their Church life. Her care for people extended to volunteer work at the VA Hospital and helping to prepare Meals-On-Wheels at the Milwaukie Senior Center—she and Ken volunteered hundreds of hours. Dorothy was a wonderful person and precious to everyone who knew and loved her. She is survived by her two brothers. A private memorial service and burial were held on June 29th at Willamette National Cemetery.

Dorothy Elaine Anna was born to parents Engward and Elin (Johansson) Nielsen on February 11, 1921 in Cairo, Nebraska. Dorothy, known by many as Dot, and &#8220;Blondie&#8221; by her brother Slim, grew up living on a farm in Nebraska with her... View Obituary & Service Information

The family of Dorothy Elaine Anna Brace created this Life Tributes page to make it easy to share your memories.