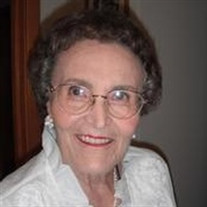 Doris Turk passed away peacefully following complications from cancer on June 11, 2011, surrounded by family members at Willamette View Health Center in Milwaukie, Oregon. Doris was born Doris Elaine Fugitt on November 2, 1920 in Riverton, Iowa. Portland became home as parents Oliver and Hazel moved to Portland when Doris was five years old. As a teenager, she became a happy, bright and attentive student as well as a big sister to Patricia. She took pride in being runner-up for Rose Festival princess from Franklin High School before graduating in 1938. In the following years Doris attended Hastings Business School and worked at Montgomery Ward. Her life changed in 1941 when Doris married Christian T. Speilberg. Together they had two children, and Doris became active in the Portland Junior Women's Club and Mt. Tabor PTA, Boy Scouts and Campfire Girls. Daughter Merilee Sommers remembers Doris as a loving taskmaster who found joy in everyday situations and loved making people laugh. She and brother Chris Speilberg said Doris was a tireless cheerleader for their after-school sports and choir activity. The family enjoyed summer camping trips at Diamond Lake, and later, at Beverly Beach. Chris recalled his Mom made every meal a delight; Chris said he especially loved her leftovers. The Speilbergs divorced and Doris' life took a distinctive turn in 1969. She married Albert J. Turk and enjoyed an active life until his passing in 1995. Doris and Al traveled the world extensively, played bridge, and became well-recognized dance partners at the Milwaukie Elks. Doris managed to visit every state but New Mexico and wanted to spread some of her ashes there. In recent years Doris lived along the Willamette River before moving into the Willamette View retirement community in 2008. Doris Turk is survived by children Merilee Sommers and Chris Speilberg, grandchildren Heather Mohr, Ashleigh and Erika Speilberg and great-grandchildren Megan and Gavin Mohr. In addition, Doris enjoyed an extended family with Al Turk. They include Doug and Sherry Turk plus Pat Matthews and grandchildren Rachel and Joab Turk, and Angela Underdown with her son Charlie. Doris was baptized in the Christian tradition with water she brought from the Jordan River. A graveside service will be at 2:30 PM, Friday, June 17, 2011 at Willamette National Cemetery in Portland, Oregon. (Please note the change in the service time) Her family requests that remembrances be sent to the American Cancer Society, or a charity of the donor's choice. For further information regarding the service please contact Peake Funeral Chapel @ 503-654-7755.

The family of Doris E. Turk created this Life Tributes page to make it easy to share your memories.

Send flowers to the Turk family.