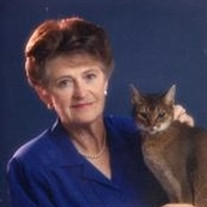 Doris "Dorie" Lee Crooks was born June 19, 1926, in Portland, OR to parents Dr. Thomas Rex Baldwin and Edna Bennison. She grew up in east Moreland and graduated from Washington High School (Portland) in 1944. Dorie and Joe Crooks were married on May 31, 1946, and raised four children: Joe, Terri, Dick and Tom. The family lived in Tigard, Aloha, and Portland. In the summer of 1963 they relocated to California, residing in the cities of Santa Ana, Newhall and Saugus. In 1971 they moved to the Chambersburg, Pennsylvania area where they lived briefly when Joe's health began to fail. He was forced to retire and they returned to Azalea, Oregon in March of 1972. Dorie received training at the VA Hospital qualifying her to operate a home dialysis machine that sustained Joe's life for two more years. In March of l975 Joe passed away. Dorie remained in Azalea, became a tax preparer, and also worked at Glendale High School in the library. The following year Dorie met and married Lowell "Ship" Shipley. They had a good life together, built a house, sold the home, purchased a motor home then traveled extensively. After a couple of years Ship became ill, causing Dorie to return to the role of caretaker once again. Ship passed in June of l984. Survivor of two husbands, Dorie blazed forth. She became very active in the Clackamas County Master Gardeners where she shared her knowledge, energy, and enthusiasm for 14 years. She also became an avid golfer, and continued her passion for home gardening. For a change of scenery she moved to the Oregon Coast to work with her daughter who had just started an antique and Oregon wine tasting business. She enjoyed more golf and made many new friends. Again, she returned to Portland as her base for travel to China, Costa Rica, Belize, Greece, New Zealand, and many other countries throughout Europe. While living in the Milwaukie area, the Ledding Library and Meal on Wheels organizations benefited greatly from Dorie's dedication, energy and selfless generosity. She walked to the library nearly every day of the week to volunteer for two to four hours. After her exercise classes at the Milwaukie Center she devoted more time to Meals on Wheels. These were all activities she enjoyed immensely. The most central part of Dorie's character was her instinctive ability to know when people needed her help. She gave to her family and community tirelessly and with passion for the remainder of her life. Dorie is survived by her 4 children, 16 grandchildren, and 16 great grand children along with many nieces, nephews and life long friends. The memories of her exemplary life and example will sustain us all as we miss her so deeply. A Memorial Service, Saturday, October 29, 2011 at 2:00PM at the Abernathy Center in Oregon City, Oregon, will be officiated by Chaplain Chuck Altig. A luncheon/reception will be held at the conclusion of the service. Friends of Milwaukie Center http://ncprd.com/milwaukie-center/endowment-funds Friends of the Milwaukie Ledding Library Contact info: http://www.ci.milwaukie.or.us/library/contact-ledding-library

Doris "Dorie" Lee Crooks was born June 19, 1926, in Portland, OR to parents Dr. Thomas Rex Baldwin and Edna Bennison. She grew up in east Moreland and graduated from Washington High School (Portland) in 1944. Dorie and Joe Crooks were married... View Obituary & Service Information

The family of Doris Lee Crooks created this Life Tributes page to make it easy to share your memories.

Send flowers to the Crooks family.