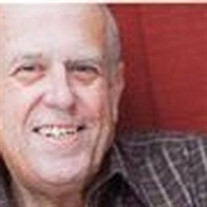 Don "Pat" Mc Carthy Just as truth is always more than the sum of the facts that comprise it, anything written about Don "Pat" Mc Carthy can only suggest the romantic husband, proud father, and generous friend those who knew him and loved him will remember. Born in Wallace, Idaho, he was adopted by Don and Peggy Mc Carthy and grew up in Marysville, Kansas, where he was active in scouting, becoming an eagle scout before graduating high school in 1960. Although his future wife, Barbara, entered Marysville the year Don finished, they met and fell in love the following summer, They married in 1963 in Boise, Idaho, where Don worked as a medical underwriter for Equifax after attending business college in Nebraska. In Boise they became parents of Todd, Brian, and Sean. The one thing Don enjoyed most was serving as scoutmaster and assistant scoutmaster with his boys' troops. In 1973, Equifax transferred Don to Portland, where he later went to work for S.A.I.F. as an investigator, remaining there until he retired to form his own agency, Arch Investigations. Over the years, Don found fun in diverse interests and passions. Invited by an old friend he joined the Toastmasters and loved that, but also enjoyed a good book, or working outdoors at Risley Garden with the Oak Grove Garden Club. Don's generosity was evident in the gift of his eyes as an organ donor, of his time volunteering for Multnomah County's suicide Hotline, and his work at St. Johns on funeral meals. Just for himself, one thing Don surely loved was traveling the world with Barbarafrom Ireland to the Great Wall of Chinasometimes with old friends, sometimes making new ones. He especially treasured time spent with family and friends after his diagnosis of stage four cancer seven years ago; he liked the saying, "Today is a gift and tomorrow is not a promise," and lived out his life accordingly. We love himand we miss him already. Don is survived by his wife, Barbara; sons Todd, Brian, and Sean; daughters-in-law Holly, Karen, and Jill; grandsons Daniel, Patrick, Brian D., Alex, and Jacob; great-grand-daughter Makayla; half-brother Harold Lutes; and half-sister, Sonja Morris. In lieu of flowers, contributions are welcome to the Mc Carthy Family Scholarship, St, Mary's Academy, 1615 SW 5th Avenue, Portland, Oregon (or another charity of choice). A Mass of Christian Burial will be held on Friday April 16, 2010 @ 2:00 PM at St. John the Baptist Catholic Church in Milwaukie,OR.

Don "Pat" Mc Carthy Just as truth is always more than the sum of the facts that comprise it, anything written about Don "Pat" Mc Carthy can only suggest the romantic husband, proud father, and generous friend those who knew him and loved him... View Obituary & Service Information

The family of Donald Patrick McCarthy created this Life Tributes page to make it easy to share your memories.

Don &quot;Pat&quot; Mc Carthy
Just as truth is always more than the sum...

Send flowers to the McCarthy family.