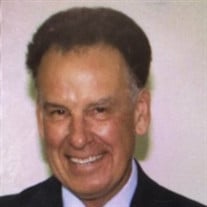 Don was a carpenter, a builder, a creator.  He loved the outdoors, loved sharing the outdoors with his children, grand children, and great grandchildren.  Whether is was tagging a deer or picking pots of wild huckleberries, he loved sharing these experiences with his loved ones. His hands were large and strong, rough from a life of construction, demolition, and road building, and artistic enough to turn out beautiful stained glass works worthy of display in gardens and homes.  He was a man of action.  He once demo'd a Union gas station, and rebuilt it in his backyard, to be used as a shop and fuel station for his trucks and tractors.  A neighbor remarked that he thought his garage was a bit dark, so Don revved up a chain saw and cut a window.  He built things that needed to be built, whether it was an addition to his church, or a towel rack for his daughter's shop.  Don had a giving heart, a warm smile, a mischievous glint, and love for everyone in the room.  In the last few years of his life, he would often marvel at his amazing family, and knew that he was a fortunate man, thankful for the life he had. Donald Grossmiller died of an aneurism on Tuesday, September 18, at 11:03 AM.  He was 96.  He was born on June 14, 1922, in Oregon City, to Charlie and Florence Grossmiller, the second of two boys.  He was in Oregon City High School's class of 1940, where he was a star baseball player with a batting average of .410, the highest on the team and a record that stood unbroken for many years.  Don always said his brother, Al, was his biggest fan, going to all of his games.  Al preceded Don in death by only 2 months, dying at 98 years of age on July 20, 2018.  Don joined the Navy in 1942 and served until 1945.  While in the Navy, Don met his future wife, Betty Jean Esselstyn of Echo, OR.  They were married on August 8, 1943 and had 5 children.  During this time Don had a construction company, and later a demolition company.  They lived in a house that Don built, rode horses all over the hills, water skied on the Columbia at Hat Rock in the "bat boat", a classic yellow runabout with fins.  Betty and Don were together for 27 years before ending their marriage in 1970. On March 21, 1971, Don married Mary Linell Birrer.  They enjoyed their life in Eugene and Veneta, camping on the Oregon coast and treating their grandchildren to life outdoors. They spent their winters in Mesa, Arizona, where they made many life-long friends.  Don is survived by his wife, Mary; children Nicki (Tom) Pierce, Kelly (Carol) Grossmiller, Clydie Sue Johnson, Jonalyn (Michael) Horsfall, and step sons Todd (Heidi), Doug, Dwight (Deedee), and Brad, as well as 14 grandchildren and 6 great grandchildren.  Don and Betty had a son, Cary (Jamie) Grossmiller, who passed away June 20, 2009. A graveside service will be held at Mountain View Cemetery on Monday, Oct. 1, at 11:00 AM.  500 Hilda St., Oregon City, OR 97045.   To send a flower arrangement or to plant trees in memory of Donald Grossmiller, please click here to visit our Sympathy Store.

Don was a carpenter, a builder, a creator.  He loved the outdoors, loved sharing the outdoors with his children, grand children, and great grandchildren.  Whether is was tagging a deer or picking pots of wild huckleberries, he loved sharing... View Obituary & Service Information

The family of Donald Grossmiller created this Life Tributes page to make it easy to share your memories.

Send flowers to the Grossmiller family.