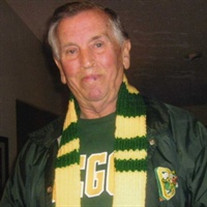 December 25, 1933 was a special day of a new beginning - that new beginning was the birth of Dewane Gerald Walden. Dewane spent the first part of his childhood in Molalla, Oregon where he attended grades 1-3 in the only one room school named... View Obituary & Service Information

The family of Dewane G. Walden created this Life Tributes page to make it easy to share your memories.

Send flowers to the Walden family.