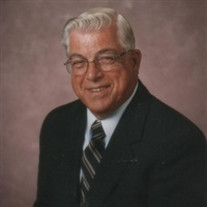 David L. Jelinek was born September 3, 1938 in Portland, Oregon, to Charles and Wilda (Broughton) Jelinek, the oldest of their five children. He is survived by his sister, Carol Bozich (Mrs. Edward), and brother James; wife Sharon (Rand); three daughters, Laura, Karen (Mrs. Jaime Chavez), and Linda; and seven grandchildren. David graduated from Gresham Union High School and started earning his bachelor's degree at Portland State University. In 1961 he earned his B.S.E.E. from Oregon State University and began his career that year with Portland General Electric. His 27-year career with that utility included many departments in several different divisions and ended in 1988 as District Manager of the Oregon City Division. At that time he moved to Northwest Natural Gas Co. from which he retired in 2000. Interests during retirement included wine making, leather working, and following the sports interests of his grandchildren. He especially loved baseball, which he played as a boy, and enjoyed also softball, basketball, football, soccer, track and horse lessons as long as a grandchild was involved. He was faithful to the Main Street Loafers, his coffee group in Oregon City from his manager days, and went occasionally to his lunch group from Northwest Natural, AMHEATS which got together to rate hamburgers at various restaurants in the area. He was the former president of Clackamas Community College Foundation and Tri City Chamber of Commerce; former director of Clackamas County Historical Society; Chairman of Clackamas County Planning Commission; member of Pacific Gas Association, National Association of Corrosion Engineers and Lane County Utility Coordinating Council. In 2005 he was elected to the Oak Lodge Water District Board and served in that capacity for several years. His lifetime battle with asthma and later COPD and lung cancer ended his life on January 29, 2015. A mass will be held at St. John the Baptist Catholic Church, Milwaukie, on February 10 at 12:00 p.m.followed by a short reception at the church. He will be laid to rest at Gethsemani Catholic Cemetery.

The family of David L. Jelinek created this Life Tributes page to make it easy to share your memories.

Send flowers to the Jelinek family.