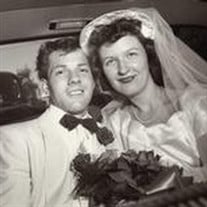 Ardella Mae Kathrein April 7, 1930 - April 18, 2008 Dale Marshall Kathrein was born on April 20, 1927, in West Linn, Oregon, to Nick and Edith "Billie" Kathrein. The family moved to Berkeley, California, in 1928, then back to Oregon City in 1943. After a disagreement with the Oregon City principal, Dale soon joined the merchant marines with his father's "encouragement". He saw action in the South Pacific during World War II as a merchantman. Drafted in the first Korean draft he joined the Army and was later honorably discharged. Ardella Mae Steeves was born on April 7, 1930, in Woolsey, South Dakota, to Dwight and Ruby Steeves. She was the first girl grandchild born to Edna and Charles Steeves. Her family moved to Hillsboro, Oregon, in 1941 and then relocated to Oregon City. It was there that her family became the first trailer manufacturers west of the Mississippi. She started dating Dale in 1948 and they were married in 1952. After marrying, Dale worked for Crown Zellerbach/Western Transportation. He worked his way up to Port Capitan. Ardella worked for U.S. Bank in Oregon City, where she stayed until she gave birth to their first child in 1961, a boy they named "Mike". In 1967, they had a daughter, "Cindy". After an illness forced Dale's early retirement in 1972, he spent most of his time bowling and volunteering his time to the Portland Bowling Association. He served as president of both the Junior Board as well as the Men's Board. In 2002 he was inducted into the Portland Hall of Fame for meritorious service. During these years, Ardella ran the family business, until her death in 2008. Along with bowling, they enjoyed traveling, gardening (Ardella), watching sports (Dale), golf, which Dale loved to play and Ardella enjoyed when he went (after all he had retired in 1972). Dale was a Mason, Shriner, and a life member of the Elks. They are survived by their son: Mike, his children Matthew, Andrew, Sarah, and a great grandson. Daughter Cindy (Russ) and their children Courtney and Ryan. Dale's sister Nina Randall of Grants Pass and a sister-in-law Jeannine Kathrein of Clackamas, along with nephews. A memorial service will be held for Dale and Ardella on Monday, March 12th, at 1:00 p.m., at Peake Funeral Chapel, Milwaukie, OR. A celebration of life with follow at the Milwaukie Elks from 2:00 - 6:00 p.m. In lieu of flowers remembrances may be made to the Shriners Hospital.

The family of Dale Marshall Kathrein created this Life Tributes page to make it easy to share your memories.

Send flowers to the Kathrein family.