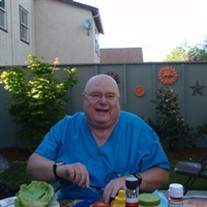 Conrad Gordon Craber, age 66, passed away on Monday, July 22, 2013. He was born on February 27, 1947 in Portland, Oregon to Gordon and Evelyn Craber. A longtime resident of the Portland area, he also resided in Pendleton, Oregon; East Wenatchee, Washington; Bridal Veil, Oregon; and Gleneden Beach, Oregon. Conrad is survived by his daughter, Jennifer, son, Travis, five grandchildren, Jahara, Noah, Trent, Tosha, and Wyatt, and one great-grandchild, Alleyah Rose. Conrad graduated from Benson Polytechnic School in 1965. He went on to Portland State University and graduated in 1969 with his Bachelor of Science in Business Administration. During his time at PSU, he met Sally Warren and they were married in 1968. Conrad worked for Sears Robuck, Bon Marche, Western Auto, Wenatchee Reclamation District, Emporium, John's Of Course and retired from Consolidated Freight. Conrad enjoyed camping and "wheeling and dealing" cars. In his later years, he wrote poetry and collected his favorite music and movies. He always had a very quick wit and though his personality was drastically changed after his accident in 2001, his sense of humor did make an appearance from time to time. No funeral service will be held. The immediate family is having a private memorial at the Oregon Coast where they will celebrate his "Walk of Life". I am free Don't grieve for me, for now I'm free, I'm following paths God made for me I took his hand I heard him call Then turned, and bid farewell to all I could not stay another day To laugh, to love, to sing, to play Tasks left undone must stay that way I found my peace... at close of play And if my parting left a void Then fill it with remembered joy A friendship shared, a laugh, a kiss Ah yes, these things I too will miss. Be not burdened... deep with sorrow I wish you sunshine of tomorrow My life's been full I've savoured much Good friends, good times A loved one's touch

Conrad Gordon Craber, age 66, passed away on Monday, July 22, 2013. He was born on February 27, 1947 in Portland, Oregon to Gordon and Evelyn Craber. A longtime resident of the Portland area, he also resided in Pendleton, Oregon; East Wenatchee,... View Obituary & Service Information

The family of Conrad Gordon Craber created this Life Tributes page to make it easy to share your memories.

Send flowers to the Craber family.