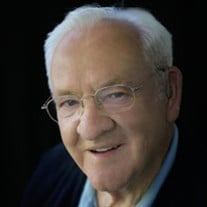 Clarence William Knowles, Jr. (Bill), 90, passed away peacefully in his home on March 25, 2017, in Portland, Oregon. Born July 5, 1926, in Salt Lake City, Utah, to Clarence William Knowles, Sr. and Isabell Myler, he was the youngest of eight children. Bill grew up in Ogden, Utah. Upon graduation from Ogden High School in 1944, he served in the Army until 1946 as a military policeman and was stationed primarily in Cincinnati, Ohio and Louisville, Kentucky. After his Army service during World War II he served a mission for The Church of Jesus Christ of Latter-day Saints in the British Mission from 1947-1949. He served as a district president for the last seven months of his mission. When Bill returned home to Logan, Utah, he attended Utah State Agricultural College (now Utah State University) and obtained a degree in history and a teaching certificate in elementary education. He was also a three-year letterman in golf during college. While Bill attended USU, he met and fell in love with Ileen Hyde. They married on November 20, 1951. After graduation he found employment in Oregon with the Portland Public School District. He moved his family to Portland, Oregon, in August 1953, where Bill started his teaching career at Glenhaven Elementary School. He taught there for 24 years (mainly teaching 6th grade), then he moved to Vestal Elementary School where he taught various primary grades for an additional 11 years. He continued to substitute after his official retirement in 1988 for another four years. During his teaching years, he also earned a Master's Degree in elementary education from the University of Oregon. While his main career was teaching, he also held many other jobs to help supplement the family income, including working at a paint shop (11 years), thinning trees on Mt. Hood (4 years), and custodial work for his church. During this time he enlisted the help of others to build the home that he and his family would move into in 1965. Bill spent the remainder of his life in this home, which was constantly filled with loved ones. Bill was an active member of The Church of Jesus Christ of Latter-day Saints where he served in various positions including stake missionary service (he loved to share the Gospel), bishopric member, and high counselor. In addition he consistently served many years as a temple patron. He had many hobbies, which gave him a great deal of pleasure including golf, playing table tennis, and avidly supporting the Portland Trailblazers. Family was very important to him. He attended as many activities for his children and grandchildren as he could; namely school events, piano recitals, choir concerts, plays, and sporting events. He particularly enjoyed celebrating his 90th birthday reunion at the Oregon Coast last July with his family. During his retirement years he provided tender care for his beloved Ileen until her passing in 2005. Throughout his lifetime he read the newspaper every day. He stayed physically fit, possessing the ability to do more push-ups at the age of 90 than many people less than half his age. He continued to play golf, recounting each and every stroke from his latest round with enthusiasm. In his later years, he had to deal with the effects of diabetes, which included dialysis three times a week for six years. He chose to do this to keep living for his family, introducing others to his church, and continuing to perfect his golf game. He was preceded in his death by his wife Ileen (2005) and his son, Paul (2000). He is survived by two daughters and their husbands: Marilyn and Kim Smith (Pleasant Grove, UT), Cheryl and Charles Yee (Manhattan Beach, CA), and by seven sons and their wives: Bill and Kathi Knowles (Beaverton, OR), Quinn and Cindy Knowles (Milwaukie, OR), Keith and Tammey Knowles (Portland, OR), Rex and Denise Knowles (South Jordan, UT), Tad and Gretchen Knowles (Eugene, OR), Bryce and JoAnn Knowles (Portland, OR), and John and Anna Knowles (Parker, CO). He is also survived by his sister, Evelyn Knowles Melchin (Calgary, Alberta, Canada); sister-in-law, Venice Hyde Sorensen (Brigham City, UT); and brother-in-law and his wife, J. Stanley and Katherine Hyde (Portland, OR). He has 28 grandchildren and 25 great-grandchildren. The funeral for Clarence William Knowles, Jr. will be April 6th, 2017 at 1pm. The services will be held at The Church of Jesus Christ of Latter-day Saints, located at 2215 N. E. 106th Avenue, Portland, Oregon.

The family of Clarence William "Bill" Knowles created this Life Tributes page to make it easy to share your memories.