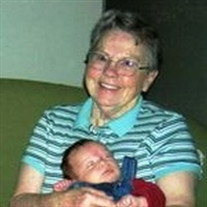 Chelsea Mae Green was born December 16, 1925 in Kansas City, Kansas. After spending her early childhood there, the family moved to Bremerton, Washington where she finished high school. She joined her mother as an employee of the Navy in the sail loft of the ship yard. Soon left that position and became a telephone company switchboard operator. While in that position a sailor caught her fancy, in what has been referred to as "picking him up in a bar" by their children. In her defense she never entered the bar, a third person in a three some invited him to join them at a dance. Following his discharge a few months later, they were married. And for the next 64 years, they enjoyed each others company. Shortly after their marriage they returned to his home in Great Falls, Montana. Due to a downturn in the economy LeRoy lost his job. It was then he decided to go to school and for the next three years she earned her PHTC degree(push hubby through college). It was during this time John and Paul became part of an expanding family. With jobs still scarce they headed for greener pastures in Oregon. In 1950, they became residents of the Milwaukie area. This was followed by further family expansion with the birth of Joann and Michael. LeRoy held several jobs and the family moved several times before settling down on King Road. This is where they called home for over 50 years. It was at this time she mer her treasured best friend Ruth Gibson. The Hummel and Gibson families joined forces on many occasions with abundant children, memories, and laughter. The Hummel family enjoyed many family outings, camping and summer vacation trips and our annual visit with family and friends in Montana. During the years of the family growing, Chelsea was an active member of St. John's Catholic Church and School, working in many groups. She was a room mother, cub scout den mother during her childrens time there. Her and her sister in law Lenore would often pack lunches and accompany the kids on field trips to pick fruit and vegatables which was a common practice of the day. She was active in the parish and community groups as well. she was the secretary of bowling leagues and was an adiv bowler and golfer. she enjoyed swim sessions as the aquatic center. She also joined LeRoy as a member of the Knight of Columbus and VFW Auxillary. LeRoy has a long history of positions at the local and state level in the Knight of Columbus. Last year they attended a banquet in their honor for their activity in the Knights of Columbus. She truly enjoyed all of the activities and groups she was involved with and all of the friends that made her life such a joy. She will be missed by her husband, children and 8 grandchildren,11 great- grandchildren, numerous nieces,nephews,friends and extended family. She passed away peacefully May 29, 2010 at Providence Milwaukie Hospital. She was preceded in death by her youngest son Michael and her brother John Green. Chelsea's funeral will be held at 1:30 pm , Friday, June 11th, 2010 at St. John The Baptist Catholic Church, located at 10955 SE 25th Ave., Milwaukie, Oregon, 97222. Phone, (503) 654-5449. LeRoy and family request that in lieu of flowers, please make donations in the name of Chelsea Hummel to: Doernbecher Children's Hospital Foundation 1121 SW Salmon St. Portland, Oregon 97205 (503) 294-7101

Chelsea Mae Green was born December 16, 1925 in Kansas City, Kansas. After spending her early childhood there, the family moved to Bremerton, Washington where she finished high school. She joined her mother as an employee of the Navy in the... View Obituary & Service Information

The family of Chelsea Mae Hummel created this Life Tributes page to make it easy to share your memories.

Send flowers to the Hummel family.