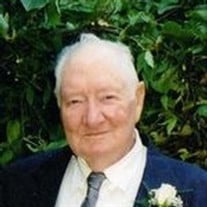 Chauncey Lee Shuey, June 6th, 1922 - May 31st, 2010 Chauncey was born June 6th , 1922 in Underwood, North Dakota. He was the oldest child of Chancey, SR and Ruth Shuey. As a young man Chauncey served in the Civilian Conservation Corps in Montana, then served in the Army during World War II in the Pacific Theater. After World War II Chauncey returned to Portland Oregon where the Shuey family had moved and commenced working as an owner/operator of his logging company. Chauncey designed and built two family homes in his life, one in Beavercreek, OR and the second in Chemult, OR next to the Klamath Wildlife Refuge. In 1951 Chauncey was introduced to his future wife, Amyrose Headrick in Beavercreek, Oregon. On October 28th, 1951, Chauncey and Amyrose were married and spent the next 58-1/2 years together. Chauncey and Amyrose were blessed with four boys; Mark, Scott, Terry, and Malcolm. Mark is married to Connie Maloney and has two children, Nicole and Nathan. Malcolm is married to Gale Getman and has two children, Joshua and Daniel. Chauncey is survived by his wife, Amyrose, four sons, four grandchildren, and sibling, Charis. He is proceeded in death by his brother, Neil, and sister, Beth. Visitation will be on Thursday June 10, 2010 from 3 to 7 pm at Peake Funeral Chapel followed by the Funeral Service on Friday June 11, 2010 @ 1:00 PM also at the Funeral Home. Private Interment will be at the Lake Oswego Pioneer Cemetery.

The family of Chauncey Lee Shuey created this Life Tributes page to make it easy to share your memories.

Send flowers to the Shuey family.