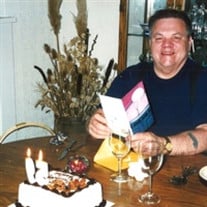 On the afternoon of October 10, 2014 we lost some wisdom in our family. Charles Edward Larson was born on February 27, 1939 in Stockville, Nebraska to Mabel and Leon Larson. Charles served in the US Marine Corps from 1956-1959, and upon completing his military service, moved on to operating tugboats, where he worked while enjoying his love and passion for the sea. Charles always had his own motto when it came to working. "If your gonna work for someone else, you had better be the Boss." With that being said, he went onto opening his own successful window cleaning business which he operated from 1975 until the day he retired in 2003. Charles was an avid fisherman, hunter, camper, and held a love for great tasting food, and fine wine. He enjoyed preparing what he referred to as "ladies' lunches" for his wonderful wife, children, and close friends. Charles's love for the history of the world was unfailing. He had an answer for anything you could ever have wanted to know; you just had to ask him! It may not have always been the right answer, but don't try telling him that, because chances are you wouldn't win! Charles will be especially remembered for his quick wit, loving and accepting spirit, and beautiful family meals, which he so enjoyed preparing. Survivors include his lifelong wife and best friend, Carol, brothers, Jim, and Karen, sisters, Trudy and Anna Jane, sons, Bruce, Dan, and Doug, stepdaughter, Andrea, grandchildren, Myndi, Jake, Kelby, Ashley, Kiley, and Kelsea, and his only great-grandchild, Elliot. A graveside service will be held at 1:30 pm, Wednesday, October 22, 2014, at Willamette National Cemetery. We would like to extend a special thank you to the staff of Marquis Care at Mt. Tabor for their great help and support. Please sign the online guest book at www.oregonlive.com/obits

On the afternoon of October 10, 2014 we lost some wisdom in our family. Charles Edward Larson was born on February 27, 1939 in Stockville, Nebraska to Mabel and Leon Larson. Charles served in the US Marine Corps from 1956-1959, and upon completing... View Obituary & Service Information

The family of Charles Edward Larson created this Life Tributes page to make it easy to share your memories.

Send flowers to the Larson family.