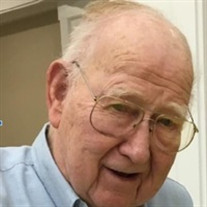 Carl was born in Lorane, Oregon, on October 8, 1928, to Carl W. and Dora Blackorby Schroeter. His family moved frequently during Carl’s childhood, as his father worked on various jobs throughout the state. Carl always said that changing schools so often made him “a bit of a loner.” Eventually, his family settled in Portland, where Carl attended Benson High School. After graduating in 1947, he enlisted in the U.S. Army Air Corps at McChord Field in Tacoma. A year later, the Army Air Corps was reorganized and became the U.S. Air Force, and Carl is in the first-ever official U.S. Air Force group photo. Stationed at Ashiya Air Force Base in Japan as an aircraft mechanic, he worked on P-51 fighter planes—work that he loved and often reminisced about. He was discharged at Camp Stoneman in Pittsburg, California, in 1950.      With a keen eye for detail and an innate sense of how things work and how to keep them working, Carl was a natural with computers and machines of all kinds. He was thorough and precise, could build or fix almost anything, and took time to do things right. He worked as a computer technician at NCR Corporation for 29 years and then at Floating Point Systems for six years before retiring in 1987.      Carl lost his first wife, Jeanne Knutsen, to cancer in 1979. Just over a year later, he struck up a friendship with his next-door neighbor, LaVerne Holder. Their friendship blossomed, and they married in 1983. It was, for both of them, a match made in heaven. They explored the world together, trailering across the U.S. and making annual month-long trips to Europe. These were Carl’s happiest years. After LaVerne’s death in 2013 and as his own health issues began taking their toll, Carl’s frequently repeated mantra was, “Do it while you can!”      Carl was a true gentleman, and his life was one of kindness, thoughtfulness, and generosity of spirit. He is survived by his devoted stepdaughter and son-in-law, Karen and Roger Miller, of Portland; his brother Dick (Liz) of Roseville, California; and his brother George of Seattle, Washington.      Heartfelt thanks go to the Providence Hospice team and to the caring staff at River Terrace Memory Care in Oregon City for their extraordinary compassion and support. Private interment at Willamette National Cemetery.

Carl was born in Lorane, Oregon, on October 8, 1928, to Carl W. and Dora Blackorby Schroeter. His family moved frequently during Carl&#8217;s childhood, as his father worked on various jobs throughout the state. Carl always said that changing... View Obituary & Service Information

The family of Carl Beach Schroeter created this Life Tributes page to make it easy to share your memories.

Send flowers to the Schroeter family.