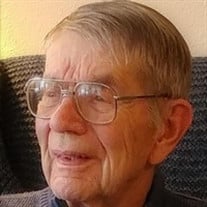 Buddy Roger Clemenhagen left us on 13 April 2018 at the age of 84. He was born in Troy, Idaho, in 1933, to Grant and Hulda Clemenhagen. He is survived by his sister Doris; his children Curtis and Ronda; grandsons Grant and Ryan; daughter-in-law Kim; and son-in-law Jim Wery.Buddy grew up on the family farm in Kendrick, Idaho, along with his older sister Doris and his younger brother Monty. Young Buddy intended to become a farmer like his father, but, one day, shortly before high school graduation, his father Grant, who had a third-grade education, said, “Buddy, I think you should go to college.” Buddy earned a bachelor’s degree in Civil Engineering at University of Idaho, putting himself through school by fighting fires in the summer. He was the first Clemenhagen to earn college degree.  After college, Buddy was drafted into the US Army, where he served for two years.Buddy met his wife-to-be Y’Vonne on a blind date while both were working at Boeing, in Seattle, Washington. They married in May of 1960 and started a family. Curtis Grant was born in March of 1962 and Ronda Lynn in May of 1964, both in Seattle. During his career as a civil engineer, Buddy designed roads, bridges, and dams. In 1973, a promotion that brought the family to Portland, Oregon. He retired at age 55 in 1988, after a successful 30-year career with the US Army Corps of Engineers. Recognizing his abilities, the Corps promoted him to increasing levels of responsibility throughout his career—as a project manager and supervisor of engineers. One highlight near the end of his career was a trip to Korea to consult on a dam project.More than anything, Buddy loved the outdoors—especially hunting and fishing, which he first took up with his uncle Roy. He passed this on to his son Curt, who has, in turn shared it with his own sons, Grant and Ryan. On 19 July at 11 am, a memorial service to honor Buddy will be held at Willamette National Cemetery.Willamette National Cemetery (19 July 2018 at 11 am) 11800 SE Mt. Scott Blvd. Portland, OR 97086-6937 https://www.cem.va.gov/cems/nchp/willamette.asp On 19 July at 12:30 pm, an informal gathering and BBQ luncheon to celebrate Buddy’s life will take place at Everett Hall in Hopkins Demonstration Forest.  Everett Hall (Gathering and luncheon—19 July 2018 at 12:30 pm) Hopkins Demonstration Forest 16750 S Brockway Rd Oregon City, OR 97045 http://demonstrationforest.org/http://demonstrationforest.org/ Directions from Willamette National Cemetery to Hopkins Demonstration Forest https://goo.gl/maps/u1b3P2jbJRM2https://goo.gl/maps/u1b3P2jbJRM2 Donations to the Multiple Sclerosis (MS) Society (one of Buddy’s favorite charities) can be made via the following link: http://main.nationalmssociety.org/goto/rondawery

Buddy Roger Clemenhagen left us on 13 April 2018 at the age of 84. He was born in Troy, Idaho, in 1933, to Grant and Hulda Clemenhagen. He is survived by his sister Doris; his children Curtis and Ronda; grandsons Grant and Ryan; daughter-in-law... View Obituary & Service Information

The family of Buddy Roger Clemenhagen created this Life Tributes page to make it easy to share your memories.

Send flowers to the Clemenhagen family.