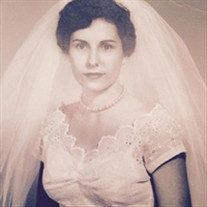 BARBARA JANE HOGE-ANDERSON was born February 28th 1934 to Naomi Ann and Charles Isban Hoge. She was the middle child of 6 children, Billy (deceased), LoRayne Anderson, Don Hoge (deceased, wife Cho), Mary Pat Schifani (husband Steve), Charles Hoge (wife Rhonda), and Jim Hoge. She was born and raised in Houston, Texas where she went to Immaculate Conception Grade school. She then attended Incarnate Word Academy and graduated in 1952. She Married Andy Boyd Anderson Jr. in 1954 and had 5 children. Andy Don Anderson (wife Lisa), Maria Isabell Foy (husband Bryan), Susan Jane Vermillion (husband Norman), Eric Hoge Anderson (wife Kim), and Camilla Lea Collins (husband Randy). Barbara worked for Willamette Industries as a human resources manager. She retired in 2000 and spent the last 14 years doing what ever she wanted. Barbara loved to travel in her trailer where she and her husband took several trips to Reno, the Oregon coast and Central Oregon. Barbara also loved to travel to her hometown, Houston, Texas to visit family. Barbara loved to spend time with her children, grand children and great grand children. Barbara always looked forward to her reunions with her grade school classmates, until her illness. She loved having her sister and nieces join her for the reunions. Barbara passed away February 19, 2015 after a long battle with Multiple Myeloma. She was surrounded by her family. A Christian Burial service will be held Saturday March 14th at 1 pm at St. John the Baptist Catholic Church in Milwaukie 97222. There will be a gathering at the home of her daughter Camilla and son-in-law Randy immediately following the mass at 13034 SE Pennywood Ct, Milwaukie 97222. All are welcome. In lieu of flowers and donations please remember our family in your thoughts and prayers. Thanks to her daughters, Mia Foy and Camilla Collins who took such loving care of their mother when diagnosed with her illness. You will be missed, we love you dearly. Thanks for the memories.

The family of Barbara Jane Anderson (Hoge) created this Life Tributes page to make it easy to share your memories.