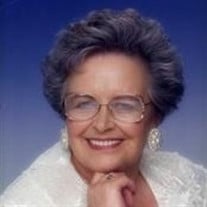 Audrey Alvena Bennett, 87, a resident of the Milwaukie community died Wednesday, June 8, 2011 at the Hopewell House in Portland. Her family gathered on Friday, June 17, 2011 at 3:00 PM to Celebrate her life and place her with her husband at Willamette National Cemetery in Portland. Audrey Alvena Bennett was born August 23, 1923 in Kimball, South Dakota to Paul Otto and Alvena Gropper Balzer. She was raised and educated in Rapid City, South Dakota. At the age of seventeen she moved to Oregon with her family. They settled in Dallas, Oregon where the family worked in the logging industry. Audrey was united in marriage to Laurence (Larry) Bennett on May 9, 1942 in Yuma, Arizona. They celebrated forty-two years of life together and raised two sons, Dean and Chris. Larry preceded her in death in November of 1984. She worked as a receptionist and assistant for Dr. Orange at his optometry office in Independence, Oregon for six years. She left to be a wife and homemaker. Among her personal interests she loved to read. She enjoyed cooking and was well known in her family for making fabulous brownies. Audrey would take her family camping and enjoyed the company of her extended family. They traveled back to Kansas to attend a family reunion as well as many trips around Oregon. In 1984 she moved to the Milwaukie community to be near her son. Her constant companion was her cat, Toyla. She would ride around on the seat of Audreys' walker and helped to put the curlers back in the box as Audrey took them out of her hair. She will be remembered as being a bright and irreplaceable part of everyone whose life she touched. She moved through life with purpose, dignity and grace. Audrey was preceded in death by her four brothers; Russell, Charlie, Otto & Al Balzer. Survivors include her two sons; Dean and wife, Lois Bennett, of Dallas, Oregon, Chris Bennett of Milwaukie, Oregon, granddaughter, Debbie Bartol and her husband, Steve, great-granddaughter, Stephanie Bartol all of Salem, Oregon. Services have been entrusted to Peake Funeral Chapel, please check back for photo and information updates.

Audrey Alvena Bennett, 87, a resident of the Milwaukie community died Wednesday, June 8, 2011 at the Hopewell House in Portland. Her family gathered on Friday, June 17, 2011 at 3:00 PM to Celebrate her life and place her with her husband at... View Obituary & Service Information

The family of Audrey Alvena Bennett created this Life Tributes page to make it easy to share your memories.

Audrey Alvena Bennett, 87, a resident of the Milwaukie community...

Send flowers to the Bennett family.