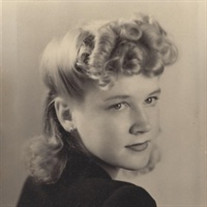 Adcock, Audrey A., 88, November 5, 1924 to September 7, 2013 Audrey Anna Adcock died peacefully on September 7, 2013 in Portland, Oregon after suffering a stroke. She was born Audrey Fenton on November 5, 1924 in Greybull, Wyoming, but moved to Portland as a child with her father and mother, Frank and Gladys (Lyman) Fenton. She was married to Richard Edlund in 1944, and together they had three children. They divorced in 1956. Audrey's second husband, Forrest Adcock, preceded her in death in 1970. Audrey worked at Rose City Transit, which became TriMet, as a schedule writer. She retired as the Superintendent of Scheduling in 1987. She is survived by her three children, Aina O'Malley, Tina Edlund, Rick Edlund and his wife Debbie; her brother, Jerry Fenton and his wife Peg; six grandchildren (Sydney, Aren, Muirinn , Koelby, Keaton, and Dalton) and two great-grandchildren (Leo and Walt). Her memorial will be held at Lincoln Memorial Park & Funeral Home, 11801 SE Mt Scott Blvd., Portland

The family of Audrey Anna Adcock (Fenton) created this Life Tributes page to make it easy to share your memories.