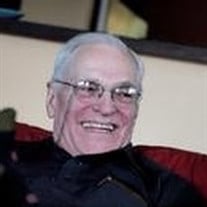 Arthur Deane Babbitt passed away October 8th, 2011 at a local area hospital from natural causes. A Celebration Of Life Service will be held Saturday, October 22, 2011 at 3:00 pm at the Milwaukie Presbyterian Church, in Milwaukie. Private Cremation Rites have been held. Arthur Deane Babbitt was born in Ross, California to Deane and Beatrice E. Babcock Babbitt. He was raised and educated in California having graduatedin 1953 from Jefferson High School in Dailey City, Ca. Art attended several classes at San Francisco College but decided he really liked cars better than college. Following his education he began working at a Standard Gas Station in Pacifica, Ca. Art was united in marriage to Mary Patiris in 1956, together they celebrated almost sixty-five years of life together and raised two daughters. Art took a transfere with the Standard Oil Company and moved his family to Milwaukie, Oregon. He operated the Cheveron Gas Station located on the old highway and 212. He leased the building but owned the business. He sold the station in 1995 but he went to work part time for the Palmer Kellum Auto Repair running errands and helping deliver auto parts. Over the years the family took some trips to Hawaii and several other places. They visited several different countries including Europe and Japan. He was an active member of the Milwaukie Presbyterian Church for forty-five years, he sang in the choir and played most instruments. He also performed with the Meryl hurst Chorale, the Camarata, and the Frances Street Singers Community Choir. He loved his family, music and cars. He was always busy, he always had music playing and he was usually happy. He had "granddogs" that he counted among his family members. There was always doggie cookies in his pockets for his furry friends. Art joined the many who chose to be part of Donate Life Northwest so that anything he could leave behind to help others would be done. Survivors include his wife, Mary Babbitt of Milwaukie, two daughters and sons in law; Helen Babbitt Cook and husband, Kyle Cook, Diane Babbitt Meiners and husband, Jon Meiners, all of Portland, sister, Cara Arrayan of Milwaukie, Brother, Bruce Babbitt of Lakeland, Ga. Also surviving are three grandchildren; Catherine Babbitt~Cook, of Philidelphia, Henry Babbitt~Cook of Tacoma, Claire Babbitt~Meiners of Portland, as well as several nieces and nephews. The family suggests that remembrances be contributions made to the Milwaukie Presbyterian Church Bell Choir, in Arts Memory.

Arthur Deane Babbitt passed away October 8th, 2011 at a local area hospital from natural causes. A Celebration Of Life Service will be held Saturday, October 22, 2011 at 3:00 pm at the Milwaukie Presbyterian Church, in Milwaukie. Private Cremation... View Obituary & Service Information

The family of Arthur Deane Babbitt created this Life Tributes page to make it easy to share your memories.

Arthur Deane Babbitt passed away October 8th, 2011 at a local...

Send flowers to the Babbitt family.