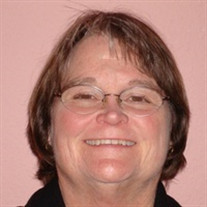 Mary Alyce (Parr) (Reed) Abney June 9, 1948 - May 7, 2017 Fifty minutes following her twin brother Robert Edward, Mary Alyce Parr was born at 10:45 PM on June 9, 1948 in Ft. Worth, Texas to Robert Charles Parr and Alyce (Starkey) Parr who died giving birth. She and her brother were taken home from the hospital and later adopted by their grandparents Robert Condron Parr and Alice Zena (Whisenant) Parr who had also adopted their father as a child, thereby making Alyce and Eddie legally siblings of their father. As an eight-year-old, Alyce accepted Christ as her Savior and lived for Him her entire life. Even in the depths of Alzheimer's, He was her Rock. In 1958, due to their adoptive then-widowed grandmother's failing health, Alyce and Eddie went to live with across-the-street neighbors Rev. Raymond Henry Reed and Norene Elizabeth (Allen) Reed, students at nearby Southwestern Baptist Theological Seminary, who adopted them on Oregon State's 100th birthday, February 14, 1959. Little did Alyce have a clue then that she would live most of her life in Oregon. In 1961, following a move to Granbury, Texas, her father accepted a call to pastor Dishman Baptist Church in Dishman, Washington, an eastern suburb of Spokane. She arrived in Spokane on her 13th birthday, moving into a house across the street from her husband-to-be who didn't have a clue for about another ten years that girls existed. The day after her June 1966 graduation from West Valley High School her family moved to Springdale, Arkansas and she entered Ouachita Baptist University in Arkadelphia, Arkansas that Fall. She graduated with a Bachelor of Education degree in 1970, fulfilling an eighth-grade dream of becoming a PE teacher. Finding employment in the far-eastern Arkansas farm town of Marianna, she taught PE for seven years at Strong Middle School. In 1974 Alyce's future sister-in-law graduated from the University of Texas Medical School in Galveston and she decided to drive over from Arkansas to attend the ceremony as did her future husband who drove from Portland, Oregon where he was employed as a locomotive engineer for Burlington Northern Railroad. While walking together on a mosquito-infested Galveston beach the spark was lit and following a three-year long-distance courtship she married James Lawrence Abney in Marianna on August 20, 1977, the day after she graduated from Henderson State University in Arkadelphia with a Master's Degree in counseling. After seven years of childlessness she and Jim were overjoyed at the birth of their son Jason Lawrence Abney on August 22, 1984. That joy quickly turned to sorrow as he lived only 42 minutes. The joy of a child returned on July 19, 1987 with the birth of their daughter Katherine Louise Abney. While living in Portland Alyce worked for a few years as a secretary at Metropolitan Baptist Church (later renamed Sunset Baptist Church) before Katie was born. Alyce and Jim enjoyed many years living a block north of Peninsula Park on the north side of Portland but that joy turned to fear as the drug-related gang presence moved into the area. After a drive-by shooting occurred just over a block from home when Katie was two years old they decided it was time to jump ship and moved in the summer of 1990 to a 19½ acre farm in the Macksburg area six miles south of Canby. After Katie entered school Alyce decided to volunteer there and soon was offered a job as an in-classroom aide to our young disabled next door neighbor. That prompted her to return to college to get an Oregon teaching certificate and then she job-shared and substituted in Elementary School PE for years until 2009 by which time the progression of her Alzheimer's Disease prevented her from continuing her joy of teaching. Jim had changed employers from Burlington Northern Railroad to Amtrak in April 1987 and retired in August 2006, thereby allowing him to care for her as her Alzheimer's-inflicted primarily spatial-related deficit increasingly stole her ability to live independently. Having shortly before returned home from the Sunday morning worship service, resting in a reclining chair with Jim at her side, the Lord called her Home at 3:56 PM on May 7, 2017. Alyce is survived by Jim, her loving husband of 476 months and 17 days; Rev. Raymond Reed, her third father and Sue Reed, her fourth mother of Grady, Arkansas; her younger brother Richard (Linda) Reed of McMinnville, Oregon; her daughter Katherine (Alexzander) Woodbury and three-year-old grandson Jaycen of Honolulu, Hawaii. A memorial service for Alyce will be held at 7 PM on Friday, May 19th at North Marion Community Church in Aurora led by Pastor Brian Ricketts. Memorial contributions are suggested to be made to North Marion Community Church or to Providence Hospital Hospice which has been so helpful the last three months. Alyce's cremation arrangements were handled by Peake Funeral Chapel in Milwaukie which has an Online Tribute at peakefh.com.

The family of Alyce Abney created this Life Tributes page to make it easy to share your memories.

Send flowers to the Abney family.