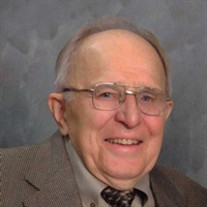 Albert E. Lokan, age 94, passed away peacefully at his home in Milwauke, Oregon, surrounded by his loving wife and family. He was born in Clatskanie, Oregon, on September 14, 1919. Albert grew up in Astoria, Oregon, he married Jane (Crandall) Lokan, former State Representative, in North Hollywood, CA, they moved to Burbank, CA, where he worked at Lockheed Aircraft until enlisting in the U.S. Navy in 1944. Following his military service in World War II, Albert and Jane moved to Portland, Oregon where Albert was employed at International Harvester as a diesel mechanic over 35 years. He was a member of Mt. Hood Machinist Union 1005. Albert and Jane raised their family of six children: Ron Lokan of Forest Grove, Dennis Lokan and wife, Sheila, of Milwaukie, Keith Lokan of Portland; Judith Schwartzkopf of Mammoth Lakes, CA; Sara Lokan of Encinitas, CA; Christopher Lokan and wife, Jill, of Sierra Madre, CA. Albert and Jane celebrated their 71st wedding anniversary on February 14, 2013. Albert was devoted to his family and the Lord. He was a very supportive father and enjoyed coaching his kids and encouraging them in sports. His most "fun times" were when the big, noisy family came together to celebrate holidays, births, birthdays, anniversaries, graduations and Jane's election..and then he enjoyed the quiet after everyone went home. Albert was an avid reader, seeking knowledge and staying well informed on many issues. He was deeply about the direction of our country and its drifting into secularism. Besides his wife and children Albert is survived by his last living brother, Gerald Lokan and wife, Donna, of Roseburg, Oregon. A loving group of 5 grandchildren and 6 great grandchildren and many nieces, nephews and close friends. Grandchildren are Jamie Lokan of Reno, Nevada; Mackenzie Lokan of Ashland, Oregon, Joshua Lokan, and his wife, Lisa, of Salt Lake City, UT; Matthew Lokan, and his wife, Jocelyn, of Salem, Oregon; Cameron Schwartzkopf, and his wife, Melanie, of Mammoth Lakes, CA and Zurich, Switzerland. In lieu of flowers, anyone wishing to make a contribution, please donate to the Milwaukie Lutheran Church Roofing Fund, 3810 S.E. Lake Road, Milwauke, Oregon 97222.

Albert E. Lokan, age 94, passed away peacefully at his home in Milwauke, Oregon, surrounded by his loving wife and family. He was born in Clatskanie, Oregon, on September 14, 1919. Albert grew up in Astoria, Oregon, he married Jane (Crandall)... View Obituary & Service Information

The family of Albert E. Lokan created this Life Tributes page to make it easy to share your memories.

Albert E. Lokan, age 94, passed away peacefully at his home in...

Send flowers to the Lokan family.