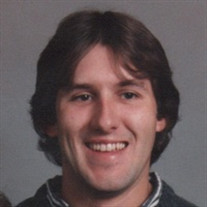 Alan Bruce Martin was born in Portland, Oregon to Gary Bruce Martin and Janet Gail Martin on July 7th, 1959. He is survived by his son, Christopher Bruce Martin, his mother, Janet Michaud, brother, Scott Martin (wife Brenda), and sisters Patricia Hamilton (husband Wade) and Christine Grimm. Also included are many aunts, uncles, nieces, nephews, former wife Brenda, and friends, as well as co-workers. He was preceded in death by his father, Gary Martin in 2002. Alan lived in Clackamas and Milwaukie as he was growing up, enjoying all of the benefits of living in Oregon, including camping, hunting, and fishing. He once wrote a paper about how he wanted to live in the forest and wander around in the woods all day. He was a kind and gentle person who loved the outdoors as well as animals. He was always very attached to all of the pets he had throughout his life. He always enjoyed his time spent outdoors, spending summers with his cousins along the Oregon coast or camping with his family. After attending Milwaukie High School, he started working at Park Place Wood Products. He had some experience with construction because he and his dad worked together building houses when he was in his teens. He had a special talent with wood-working, and excelled at cabinet making. He advanced in the company and eventually was building custom cabinets for high-end houses, including the "Street of Dreams" developments. His work was perfect, worthy of praise by the owners of these million dollar mansions. He was a true artist and worked there for over 30 years. Alan married Brenda Clifton in 1981 and had a son, Christopher, in 1983. They lived in S.E. Portland for many years. Alan built a custom fireplace mantle for the house on Grant Street, which gave him a real sense of (well-deserved) pride. Alan always loved music. He was one of the few people who still had a turn-table (record player) when they went out of style. He even carved out the image of the album cover "Chicago" on a block of wood, which may become his legacy. He was so proud when his son Christopher showed a great musical talent with the guitar and music composition. Even though he didn't express it in words, you could see the pride and appreciation in his face. Alan was a quiet, sensitive person, maybe too sensitive for this world. Even so, he had a great sense of humor. He would throw his head back slightly and laugh easily. He loved football, and taught his toddler son to put his hands in the air and say "touch-down" during the games. He enjoyed playing games with his family at get-togethers and was always a good sport. He most recently worked in construction in Wilsonville, building new houses. His employer was very appreciative of his talents and he valued Alan's work and also valued him as a person, as we all did. Alan continued to do what he was good at, working with wood, creating something beautiful and long-lasting. We will miss him. Placement will be at Skyline Memorial Gardens on November 6th at 11:00 a.m. followed by a Celebration of Life at 11912 SW 25th Ave. Portland. Additional parking is available at Stephenson Elementary School.

The family of Alan Bruce Martin created this Life Tributes page to make it easy to share your memories.

Send flowers to the Martin family.