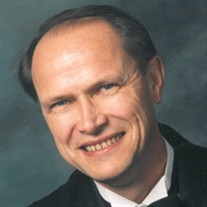 On Friday, November 16, 2018, Alan Hames, husband, father, brother, son and uncle passed away surrounded by his family at the age of 73 years. Alan will be forever remembered by his wife and best friend Helen, his beloved children, Diane, Michael (Sam) and Terry (Beth), his precious grandchildren Jack, Eloise and Grace, and his brothers and sisters Vera (Bob) Tharp, Harlen, George, Ruth (Beryl) Skovgaard, and Robin (Rick) Mauer. Alan will also be remembered by numerous nieces, nephews, extended family and dear friends.  Alan was born in Billings Montana on March 21, 1945 and later moved with his family to Worland Wyoming where he graduated from Worland High School in 1963. He attended Warner Pacific College in Portland Oregon when he met his wife of 53 years, Helen. They were married in 1965. Alan enlisted in the US Army in 1966 and was stationed in Berlin Germany with his wife. They had their first child in 1969 while in Germany and they returned to Billings Montana in 1970 where they had two more children.  In 1977, Alan moved his family to Portland Oregon where he pursued a career in computer electronics until he retired from Intel Corporation in 2011. Alan joins his sister Judy, mother Idabess and father Fred in the hearts of those who knew and loved him. The family would like to express appreciation and a heart felt thank you to the people at Gracelen Terrace, who cared for our loved one in his final year. A special thank you to the team at Hospice Care of the Northwest - we want to express our gratitude for their grief guidance during this difficult time. A Memorial Service will be held on January 12, 2019, at 11:00am, at Peake Funeral Chapel, 1925 SE Scott Street, Milwaukie, OR. Memorial donations in the memory of Alan may be made to the Union Gospel Mission at ugmportland.org. To send a flower arrangement or to plant trees in memory of Alan Roy Hames, please click here to visit our Sympathy Store.

On Friday, November 16, 2018, Alan Hames, husband, father, brother, son and uncle passed away surrounded by his family at the age of 73 years. Alan will be forever remembered by his wife and best friend Helen, his beloved children, Diane, Michael... View Obituary & Service Information

The family of Alan Roy Hames created this Life Tributes page to make it easy to share your memories.

Send flowers to the Hames family.