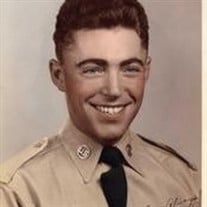 Abel Joseph Silva passed away August 31, 2011 at Kaiser Sunnyside Hospital. Abel was born January 26, 1931 in San Jose, CA to Joseph Silva and Margaret Escobar. He was raised in central CA and graduated from Hollister High School. Not long after graduating, Abel chose to serve his country as a member of the United States Air Force. He served 4 years, and came to Oregon in 1952, and was stationed at Tillamook Naval Training Base. He was joined in marriage to Macel L. Ford on July 17, 1954. They enjoyed 57 years together. Abel was discharged in 1955 and returned to school and graduated from San Jose State University in 1959, with a degree in Industrial Arts. After graduation he taught junior high for 30 years, with the Alum Rock Unified School District. Abel enjoyed playing, coaching and referring several sports including baseball, basketball, football and track. He was avid sports fan. He also enjoyed spending his time working on cars. At one time, he had 17 cars that he had brought home to fix up. His favorite was his 1972 Rolls Royce, which was referred to by the kids as Grampa's car. Camping, fishing, and hunting were favored past times as well. He spent an entire summer in Alaska, enjoying nature. Abel is survived by his wife Macel Silva, of Milwaukie, OR; five sons, William Silva of Michigan; Steven and wife Donna Silva of Carson City, NV; James Silva of Sunnyvale, CA; David Silva of Michigan; and Christopher and wife Erin Silva of Gresham, OR; one daughter, Diane and husband Mitch Hart of Modesto, CA; his brother, Raymond and wife Joanne Silva of Athens, GA; and his step brother John Texeira of Fairfield, CA. Abel is also remembered by his 18 grandchildren, and 8 great-grandchildren. Visitation will be on Sunday Sept. 4, 2011 from 1 to 5pm at Peake Funeral Chapel. A Mass of Christian Burial will be held on Wednesday Sept. 7, 2011 at 11:00 AM at St. John the Baptist Catholic Church, in Milwaukie. Interment will follow at the Willamette National Cemetery at 2:00 p.m.

The family of Abel Joseph Silva created this Life Tributes page to make it easy to share your memories.

Send flowers to the Silva family.