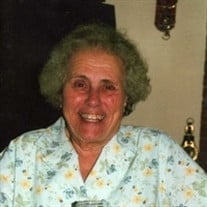 On Thursday, April 25, 2013, Fay Knittle peacefully passed away at a local care facility. Fay was born on June 22, 1928 in Colchester, Essex, England to William and Emily (Chapman) McDonald. During World War II, in the fall of 1940, Fay and her older brother, Bill, were sent to stay with relatives in Milwaukie, Oregon; where she attended Milwaukie High School. Missing her family, she returned to England prior to graduating from Milwaukie High. While is England she met her husband, Fred. They had two daughters, Jane and Anne. Fay's life was never an easy one. Her strong will and the love of her family kept her going; whether it was crossing the Atlantic Ocean during wartime, traveling across the United States from New York by train to the Portland area as a young adolescent with only her brother, or even being a single parent raising two head strong girls. Anyone who knew Fay knew of her love of gardening and the pride she took in her flowerbeds. I'm sure her holiday baking - from cakes, chess tarts to shortbread contributed to many pounds being gained by her grateful recipients. Most of all, though, was her love and dedication to her animals (dogs, cats, birds, and squirrels especially); arising in the early hours to be sure her dogs would have their walks in the morning before she went to work. Fay Knittle upon her return to live in Milwaukie, Oregon worked at Olson's 5 & 10; Dwyer Memorial Hospital and at Northwest Primary Care from where she retired. After retirement, Fay enjoyed her family, playing Bunko and going to lunch with "the High School girls", in addition to puttering in the yard and taking care of her animals. Fay is survived by her two daughters, Jane Rowell of Portland and Anne Knittle of Boise, Idaho; brother, William McDonald; nieces Christine (Barry) Larson and Margaret Sheldon; grandchildren, Sarah (Billy) Smith, Jennifer Knittle, Megan Dutcherson, Stephen Rowell and C.J. Church; and 8 great-grandchildren. The family would like to express their gratitude to the staff (who became like family) at Avamere Rehabilitation of Oregon City and to Dr. Dennis Mayer.

On Thursday, April 25, 2013, Fay Knittle peacefully passed away at a local care facility. Fay was born on June 22, 1928 in Colchester, Essex, England to William and Emily (Chapman) McDonald. During World War II, in the fall of 1940, Fay and... View Obituary & Service Information

The family of A. Faith "Fay" Knittle (McDonald) created this Life Tributes page to make it easy to share your memories.